A DIY touch probe for my Wasp 3D printer

This posting provides the recipe to build a touch probe. This kind of tool may convert your 3D printer into a 3D scanner (for carved surfaces), or it can be used to measure objects.

This project consists of three parts:

I'll put some pictures here just to ignite your curiosity. 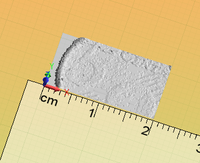 This is a short video showing the probe in action:

The main challenge of my touch probe is to use only 3D printed parts and standard mechanical components which can be bought off-the-shelf from hardware shops. 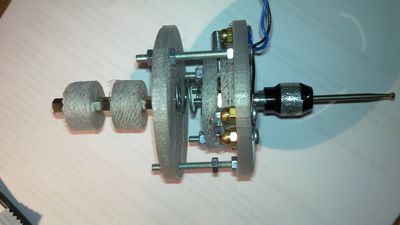 The probe consists of:

The dome nuts must be mounted by the M3x8 bolts on lowerfix using the three groups of paired holes. These three pairs of nuts will be used as three "normally closed" buttons, connected in series. For this, use short chunks of the phone wire to connect the nuts as shown here:

The remaining part of the phone wire can be soldered to the jack terminals (one wire per terminal, the order does not matter).

Now the other three holes of lowerfix can be used to connect it with topfix. Insert the three M3x40 bolts in the remaining holes in lowerfix (the heads must be in the same side of the M3x8) and fix them using three M3 nuts. Put other three M3 nuts on the long threaded ends of the M3x40 bolts. The topfix part will be fixed to these bolts using three nuts below and three nuts on the upper side. The topfix part can be raised or lowered in this way to tune the right strength of the spring. Do not mount topfix yet. Just put the M3x20 bolt in the central hole of topfix, its head on the side where there is a notch. (This notch keeps the spring in place). Fix this bolt by a M3 nut on the other side. I suggest to add two suitable washers on both sides to enlarge the contact surface and provide a stronger fixation, less prone to vibrations and torsions. This bolt will be used as a shaft to fix the probe to the mandrel of a micro drill (my Wasp uses a Proxxon LBS/E). Alternatively the probe can be fixed directly to a wasp support (e.g. by the "C" optional component).

The part B comes in two "flavours" (or options) I wanted my probe to have a mandrel, in order to mount different probe tips for different usage scenarios (longer, shorter, thinner, thicker..) It was quite hard to find supports for standard mandrels. Proxxon connects its mandrels to threaded tubes M8x0.75. There are two kinds of mandrels available: Three-jaw drill chuck (Proxxon's part.no 28941) Collet set (part.no 28940). Obviously there may be many third party cheaper clones on e-bay.

This picture shows the 3D printed parts needed for part A and part B first option (stl files can be downloaded using this link):

The first option for part B uses the three-jaw drill chuck. I was not able to locate a compatible threaded tube on the market, so I decided to 3D print a threaded "pole". It works, but a plastic thread deteriorates quite quickly. If you change the probe tips very often, maybe you'll have to print the part again.

The materials for both "flavours" is the following:

Insert the threaded end of floatingtopnohole into the floatingokh9 hole. Install the three M3 bolts in the holes and the nuts on the other side. Put the three pins laterally so that the two plastic parts can block them like sousages in a sandwitch. I suggest to scrap the shelf pins by a piece of abrasive paper to have a better contact.

Install the drill chuck. The plastic made threaded screw is not perfect, so the first time you'll have to fasten and release it several times, each time doing some more turns before the chuck can use all the thread it needs.

If you decided for this option you are done.

The other option for B uses the collet. It is a better solution, more durable.

These are the components for A and B second option (stl files can be downloaded using this link): 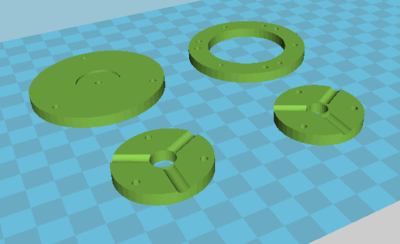 For this option you need:

It happens that many metallic led holders use the same threading pitch of the Proxxon collars... I joined together two led holders using a M3x20 bolt and two nuts. These are the components: the two led holders, the bolt and nuts to join them together, the led holder hexagonal nut, the collar and clumping nut by Proxxon. 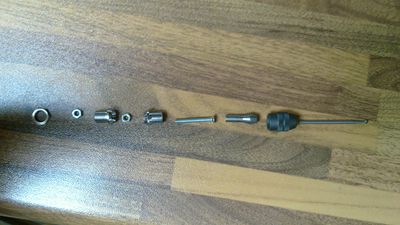 The components in the picture belong to a second prototype I built. Actually, these led holders have a shorter threaded part than those used in the prototype depicted in the other snapshots. Obviously the longest threaded part the better, as the collar and then the probing tips can be fixed in a better way. 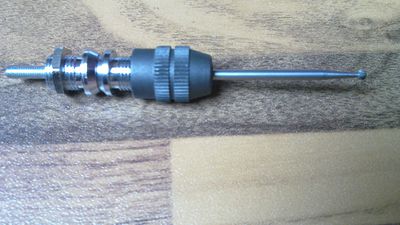 This bar can be fixed to floatingh8 using one of the hexagonal nut provided with the led holders. It is possible to mount floatingh8 as the upper part of B and mount the led-holders-bar such that it passes through the hole in floatingh10 or viceversa, floatingh8 as the bottom side of B. The former is more compact. I decided for the latter as it permits to grasp by thumb and index the thicker part of the led-holders-"bar" when I want to fasten or unfasten probing tips.

The mounting of the shelf bins as sousages dropping out from hot-dogs ;-) has already been described for the other option of B.

Now whatever option you have chosen for B it is possible to position it into A, put the spring in place, and close topfix on the top as a cover using the three M3 nuts to fix it. The three shelf pins must be positioned between the brass dome nuts to close the circuit.

Now you can test the probe using a digital multimeter. Set the multimeter to 2K or 20K ohm (it does not really matter), and connect the probes to the two contacts of the jack. You should read zero (closed circuit). As soon as you touch the mandrel of the floating part the circuit should be open (the multimeter should show infinite)

For C I have used a 4cm hexagonal pcb spacer and two printed support (so that the spacer can be grabbed by the micromot support of the Wasp).

The hardware of the probe is complete.

The challenges for the design of the interfacing circuit were:

Here is the circuit. 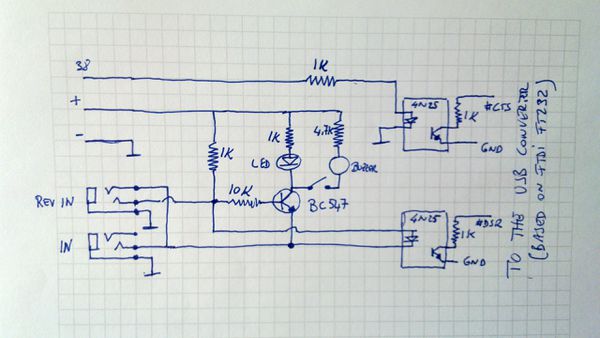 It is connected to the EXT2 connector of the Wasp 3D printer, or more precisely to the EXT2 port of the Ultimaker board inside the Wasp. 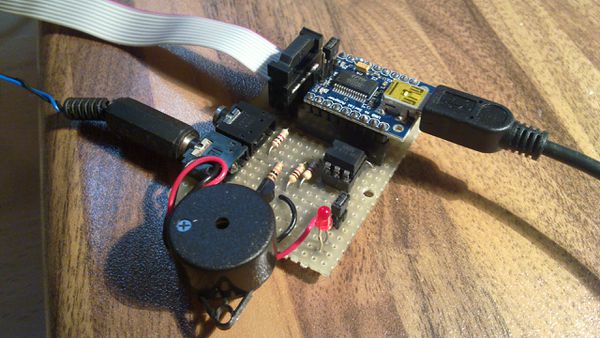 There are some tricks:

I wrote an experimental python 3 program to drive the scanner.

It is just a proof-of-concept. It provides a g-code line terminal plus it supports some scanning commands.

The most important feature is the emergency exit ctrl-C. If you send a wrong g-code command and the motors of your 3D printer are in trouble because the probe hits a mechanical boundary, promptly press ctrl-C. This resets the 3D printer completely and immediately aborts the current operation.

For the sake of completeness, the Marvin firmware running on the Wasp printer does not implement the M112 emergency stop, so the trick has been implemented by toggling off and on two control signals (DTR/RTS). This is a built-in reset command for the arduino board inside the Wasp printer.

You have to patch the python serial library to be able to use the 250000baud speed (which is non-standard). In Debian the file to patch is: /usr/lib/python3/dist-packages/serial/serialposix.py and the patch is this: http://sourceforge.net/p/pyserial/patches/_discuss/thread/ed3fb0de/f4fd/attachment/pyserial.patch (there is a local copy here )

All the G-code command will be prompted and sent to the printer. The commands for the probe has a # prefix.